Understanding the university mental health crisis through play and materiality.
A collaboration with the Imaginaries Lab.

What does anxiety look like? What is the texture of feeling contented, or overwhelmed? Today, we see claims about classifying and quantifying emotions through machine learning, which often ignores neurodiversity by treating it as an edge case. But what could a more healthy AI approach look like?

A mental health crisis on campus. 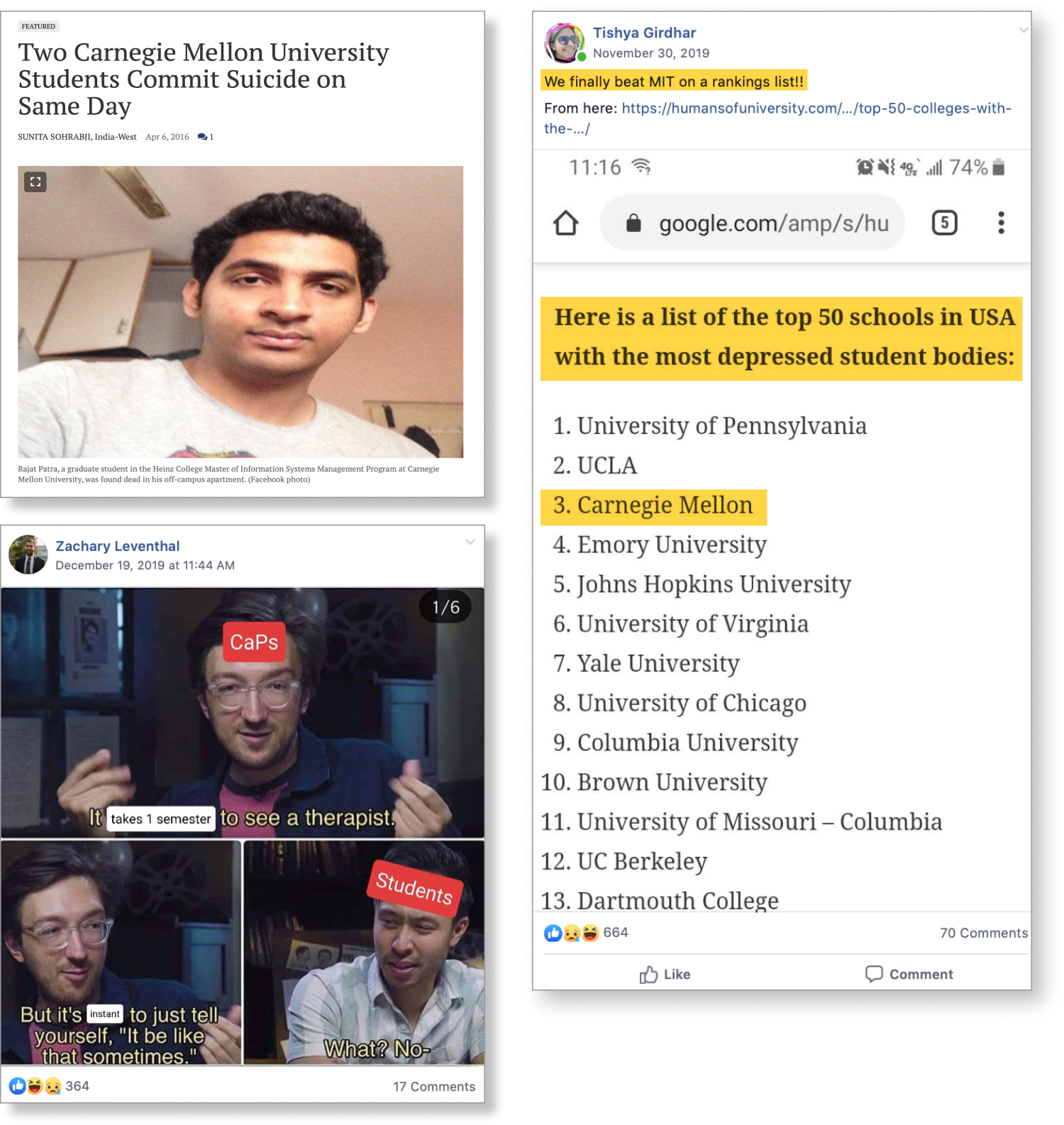 University professional counseling services at maximum capacity with a minimum wait time of 50 days. Two suicides in 2016. A pervasive mental health crisis on campus that nobody can openly talk about. Today, most university often surveys its student body yearly, but surveys rarely capture the qualitative nature of emotions and provide little emotional support from being heard. How can we design an experience to allow participants to express their feelings better and capture better mental health data?
‍
‍ 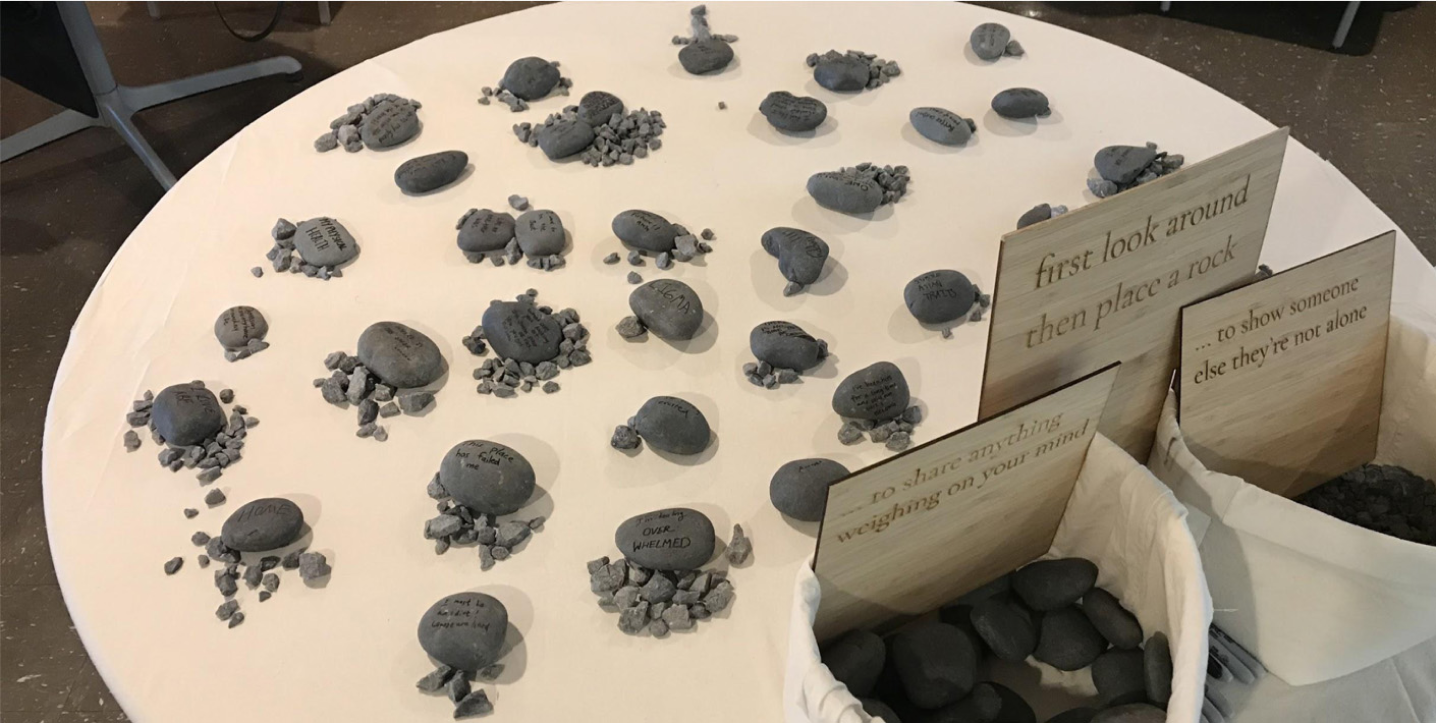 Labeled rocks on the table. The exhibit after two days in the library.

The Empathy Rock Garden project sets out to address the common feeling of being alone in your anxiety. By encouraging people to express the things that currently ‘weigh them down,’ we allow people to relate to others and evoke a feeling that they are not alone. The project was exhibited in a library, where passersby could take a rock, scribe it, and place it in the garden. Others could make use of small stones, which were placed next to bigger rocks as a sign of empathy.
‍ 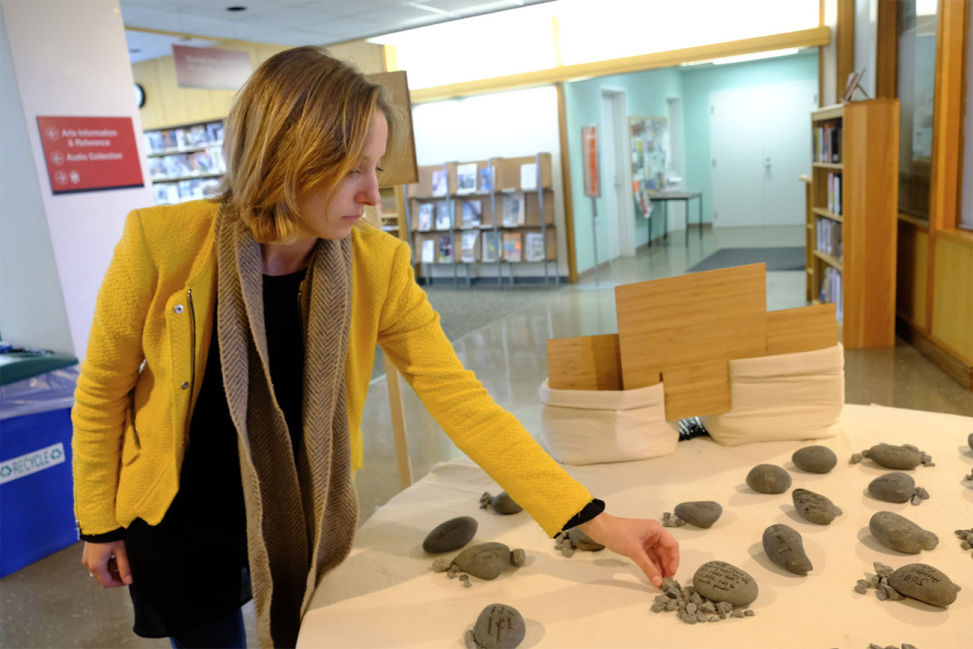 Carlie expressing empathy towards “one class is taking over my life. it’s crazy that a class has so much power.” 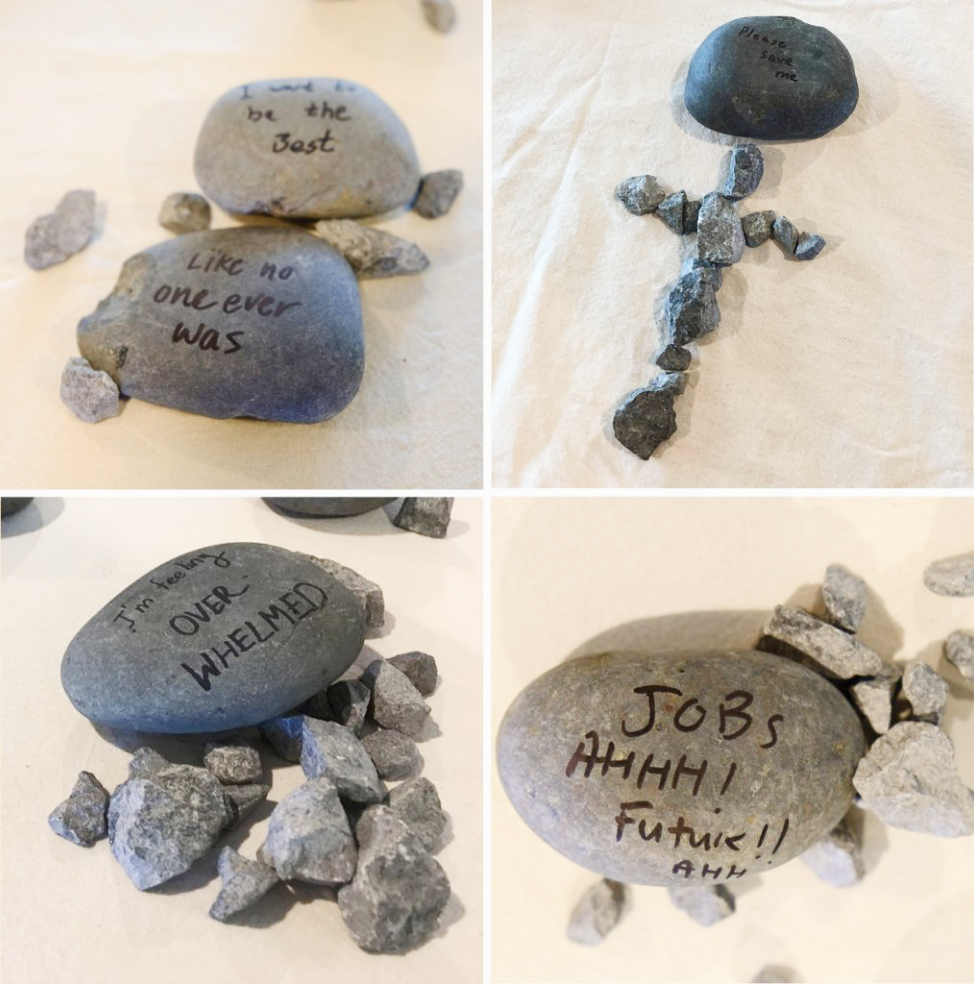 People can write messages on big rocks and show empathy by placing small rocks near the bigger rocks.

We observed that the barrier of entry for interaction was lower with small rocks —many participants places small rock and spent time observing others’ messages. Some even gathered a handful of small rocks to distribute among the existing rocks they empathized with. Due to the sensitive nature of this topic, we avoided directly interviewing particpants afterwards. 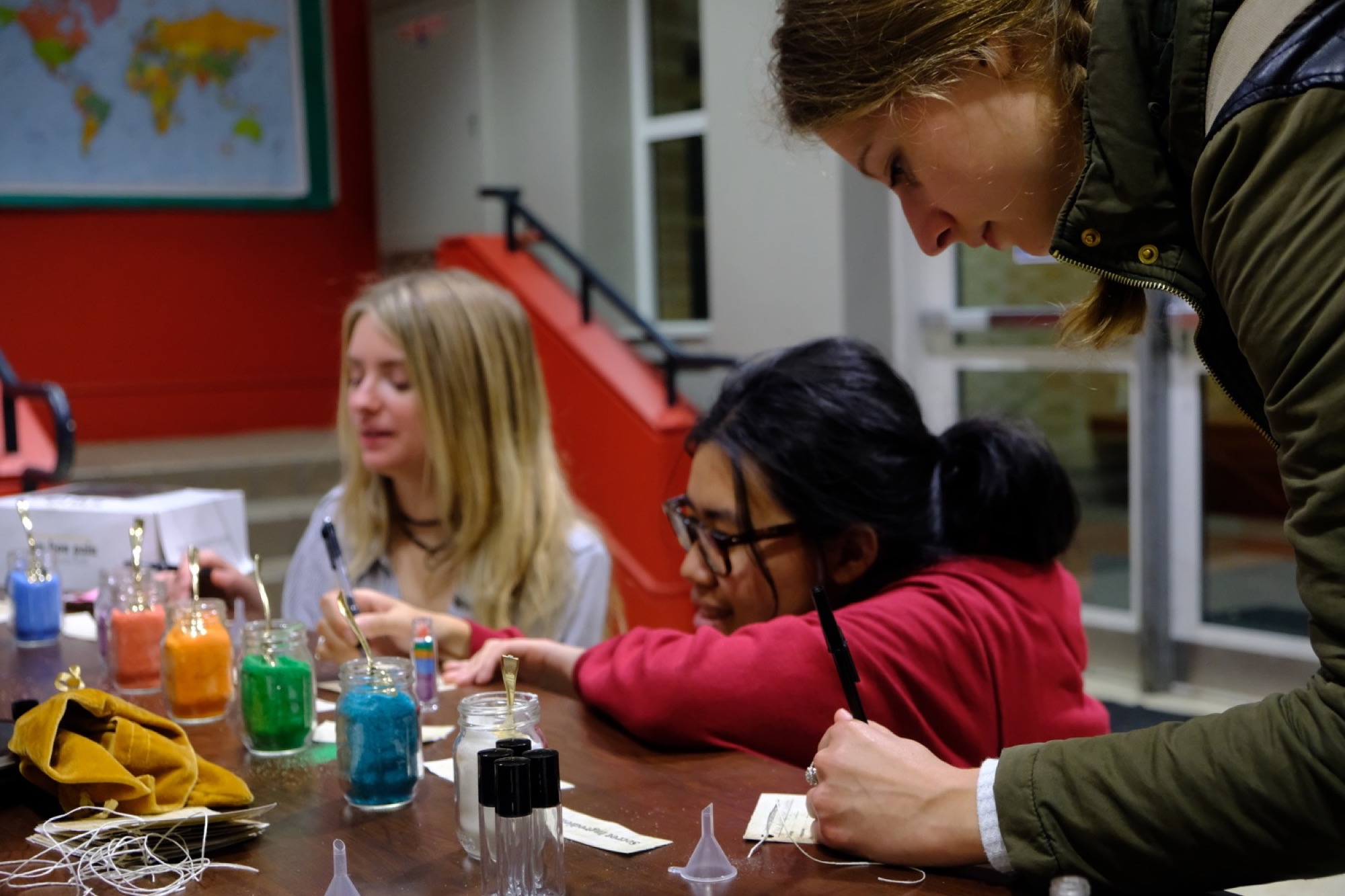 The team guided participants to create a potion step by step: First, define a challenge. Then, take a vial and place ingredients (colored sugar) that you need to succeed in that task. Each ingredient represented a quality that one might need to handle a challenge, such as “courage,” “trust,” or “discipline.” Finally, after placing the ingredients, we asked participants to think of an “activation” phrase for the potion—like any good potion, it needs an action to set it off. The activation phrase was an actionable first step—we wanted participants to not only think about what qualities they need but also what is a single action that can move them forward.

A quick reel of snippets of conversation from the workshops. 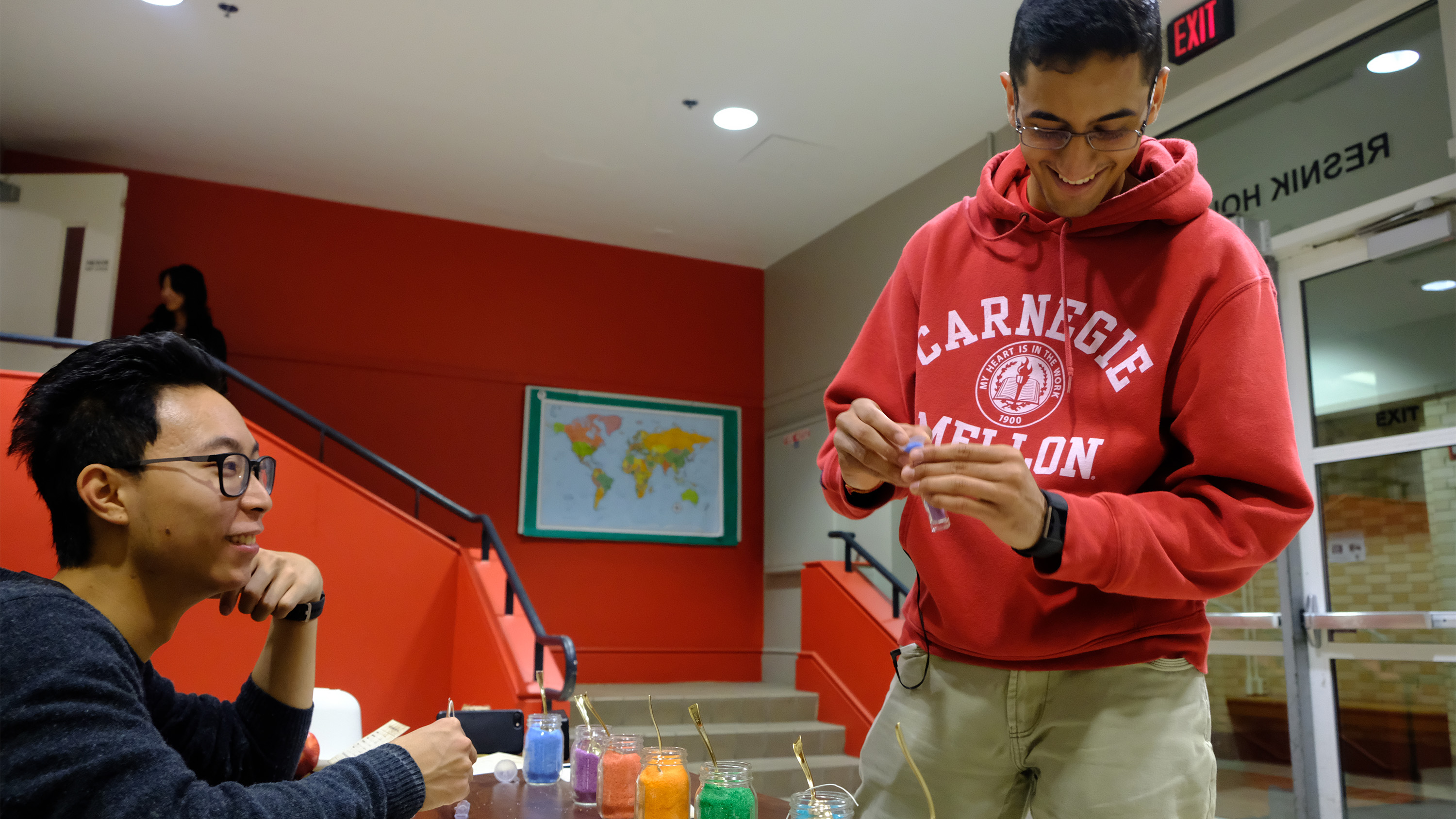 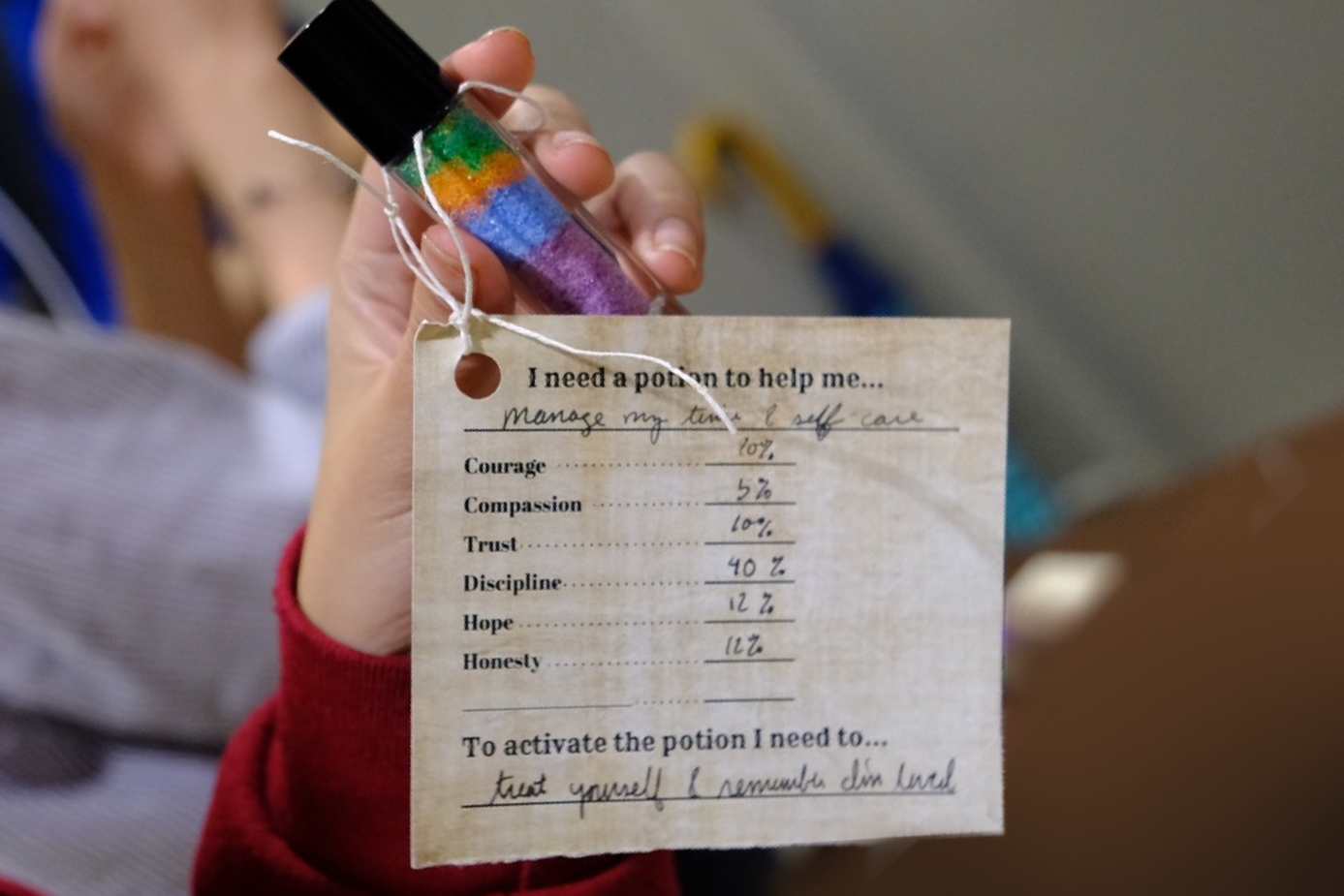 A vial being filled with discpline (purple), courage (green), and compassion (orange) during the workshop.

(1) Often time the activator wild card of “rest more” is discarded. (2) Most CMU student feels like like they need more discipline in their life. (3) Playfully abstracting heavy questions such as “what are your values”, “what do you want to achieve”, and “how do you plan on achieving it” via an activity helps eases the conversation.

Most participant felt that if they had more disclipline their personal wellbeing would be better.

Play is a powerful tool to tackle difficult conversations. The process of identifying an emotional need, and working through it is something that most people don’t often do. By leveraging play, we broke down norms and taboos to get the dialogue flowing.

Initially the garden was to represent life categories, such as “work” or “family”, that we thought might weigh on people’s minds. Yet participants felt it was too prescriptive, and asked many questions on whether they were getting the interaction right. We decided to keep the interaction open-ended, with no particular guideline on where to place rocks.
‍

We tested many materials for interaction, including pebbles, beads, moss, flowers, gravel and string. Our initial intention was to provide a diverse set of materials, so participants can personally interpret them and use them accordingly. However, we found the task of interpretation was too difficult, and diverted participants’ attention to attempt linking material qualities to abstract qualities, instead of focusing on self-reflection, therefore we decided to standardized the material with colored sugar. 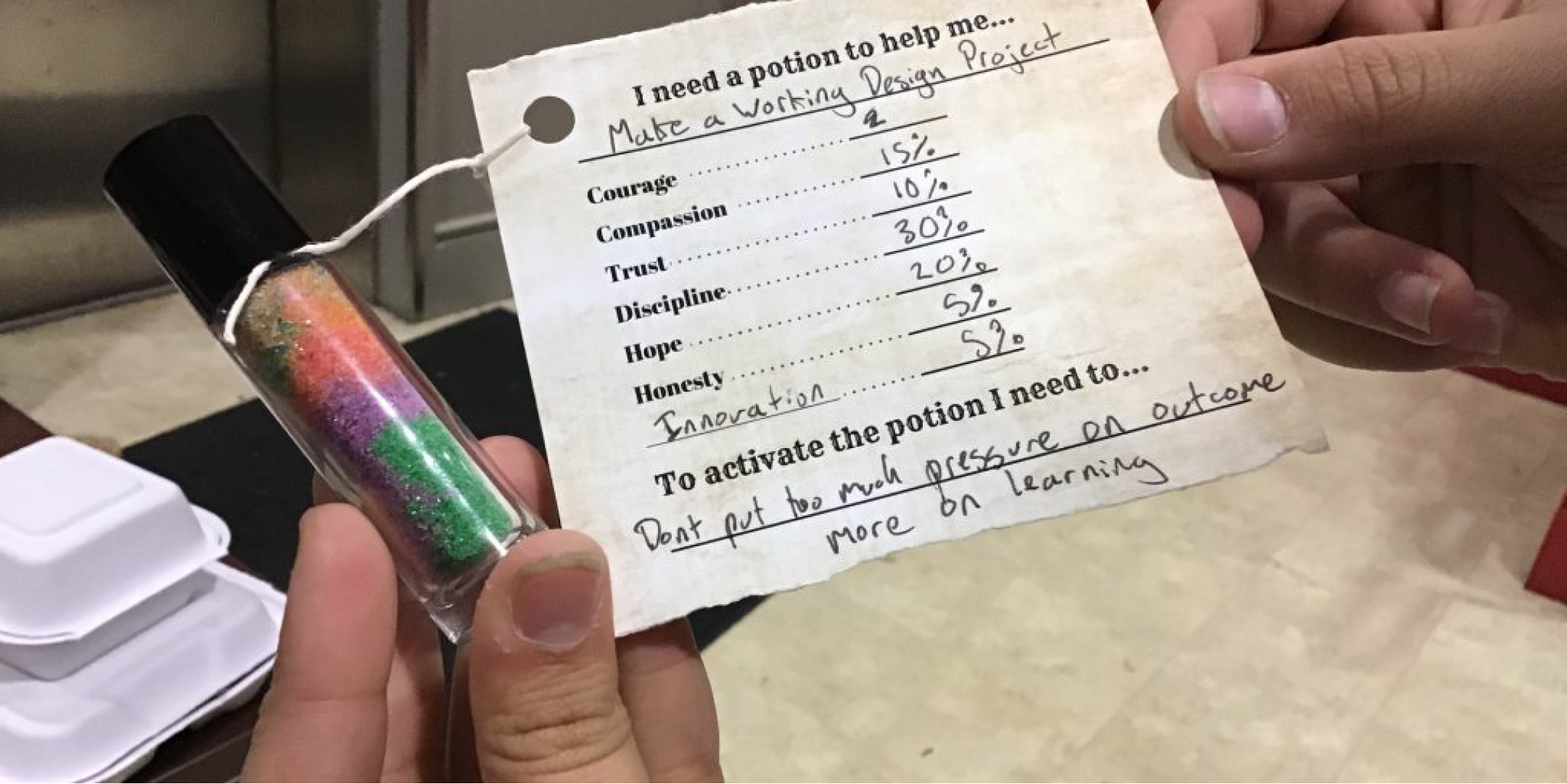 Personalized Potions was an opportunity for out-loud individual reflection, and a call-to-action to step towards their goals. On the other hand, Empathy Rock Garden was a quiet, but also collective experience, and the artifact was meant to be left behind. In both cases, staging the interventions in the right environment seemed to matter greatly. Potions in the dorm and rocks in the Library. Both projects had the kind of impact we were hoping to have on our participants:  they were able to communicate in meaningful ways. We hope that these conversations continue beyond the life of the exhibits.
‍